What to do with all these old dive mags!?

As you know, we’re mad keen on protecting the environment. We do everything we can to reduce, reuse, recycle, refuse (and all the other r’s!) as a business. Ultimately, everything on Earth is connected and we never forget that the choices we make on dry land will end up impacting the ocean even if it doesn’t appear to be directly connected. But what does this have to do with dive magazines?!

How The Honest Diver’s PACKAGING saves the oceans

We try and make our packaging from 100% recycled materials. It gets difficult when our suppliers send us stuff in plastic (we’re working on it), but we make sure that all of the packaging we use to deliver your diving goodies is compostable and/or recyclable. We go out of our way to find materials to use – did you know our Honest Diver stickers are biodegradable?!

So how does this link to the ocean? Well…

The ocean is a massive heat sink. As climate change causes our atmosphere to heat up, in turn, the ocean warms as it absorbs the excess energy. This increase in temperature destroys coral reefs. I’m sure you’ve heard of the bleaching events that are going on in some of the more tropical areas of the world. Corals are dying as the temperatures rise and as they take decades to regrow, scientists are concerned that they’ll never fully recover.

The ocean is also a massive carbon sink. The more emissions we create, the more carbon dioxide the ocean absorbs. This leads to ocean acidification – our carbon emissions are actually changing the pH of the ocean and they’re becoming more acidic. This is bad news for marine life. Creatures like crabs, lobsters and corals have calcium carbonate skeletons and shells. They’re literally starting to dissolve because of the acidity of the water.

Climate change is also the cause of sea-level rise. And it’s not just because the polar ice caps are melting – anything that heats up expands in size. This is bad news for low lying coastal communities and another hit for coral reefs as they depend on their well-lit shallow water habitats to grow.

Removing debris from the ocean

The Honest Diver Team remove every piece of rubbish they find on a dive. By choosing to use paper-based packaging, we’re completely avoiding the chance for any plastic packaging to find its way to the ocean. We’re regularly picking up plastic bags, packing straps and polystyrene from our dive sites. The biggest issue with plastic is the fact that it doesn’t biodegrade. It never disappears, it just breaks down into smaller and smaller fragments that eventually enter the food chain. At least if our packaging did find its way to the sea by accident, it would biodegrade relatively quickly.

You can even take a course at our sister dive school The Fifth Point that teaches you to remove debris and become a citizen scientist at the same time!

Development of coastal areas is directly related to coral reef decline. It increases runoff from land which washes pollutants into the sea which poisons marine life. This type of development also leads to the destruction of mangrove forests which act as vital nurseries for lots of species plus they act as a filter removing harmful toxins from the water before they reach the reef. Deforestation further inland causes similar problems as runoff enters the river systems more quickly and it’ll eventually reach the sea.

I had an epiphany the other day and worked out yet another way we can improve our delivery packaging!

We have LOADS of diving magazines knocking around Honest HQ, our own personal ones that have piled up over the years, plus the copies that get sent to us as freebies for our customers. Rather than them sitting there collecting dust, or just chucking them straight into the recycling, I’ve decided to put them to good use as protective packaging for you!

Cue me grabbing the massive shredding machine from next door and after a couple of hours of shredding frenzy I had a big bag of perfect packaging material! Now we can box up your goodies using resued materials and when you’re done with it, you can easily chuck it all in your recycling… or you can treat it like a jigsaw puzzle and try to put the magazine back together!!

Love is in the air! Are you treating that special scuba diver in your life? #scuba #love #valentinesday #thankyou #fyp

♬ Be My Baby – Ronnie Spector 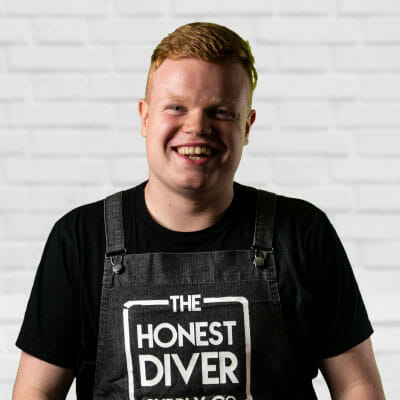 Harry was one of our very first students at The Fifth Point. Since then he's sailed through all of his courses and is just SO passionate about diving... and now he's a PADI Rescue Diver with hundreds of dives under his belt and a full-time Honest Team diver! Harry is the perfect person to talk to if you're thinking about getting into diving as a career at a young age, seeing as he started in the industry straight out of school he knows all the ins and outs!